My dad once told me that at the end of a long day, all he wanted was to come in the front door and have his little kids run to him, excited to see him. Isn’t that sweet?! My response at the time was two-fold. First, to ask him if we did that, and thankful to hear that we had. And second, to note that if I ever have kids, I would want them to leave me alone for the first ten minutes after I got home so I could decompress.

It turns out my dad was right (again). One of the most amazing things at the end of a long day is to walk in the door, laden with a heavy purse, briefcase, and bag of whatever other random crap I’ve accumulated throughout the day and hear, “Molly! Molly’s home!” It puts a smile on my face just to type the words.

But it hasn’t always been like that. When we were first married and I would come home, eager in my StepMollyness, super excited to see the kids, I would be greeted with mostly indifference (unless I had groceries with me and thus the promise of dinner). They would look up from the TV, sometimes say hello, sometimes just look at me, and then go back to the TV.

I solved that problem by declaring no TV during the school week. (Just kidding. Kind of.)

It took a couple of months, but soon they were excited to see me when I came home, eager to share about their day or show off art creations or ask to get out the Play-Doh. And now, they pounce on me when I walk in the door, which is nearly always awesome.

I have been so, so blessed in my transition into the kids’ lives. Whether it was the kids themselves, their ages, the way we gently introduced me into their lives, their mom choosing to only say positive things about me to them, or the fact that the situation has been covered in prayer–or all of the above–it has been really good.

But don’t get me wrong–there were moments. Yoseph and I had our moments. He is strong-willed and so am I. But his passion and emotion also meant that he gave his love and expressed his emotions more freely. His love language is totally physical touch. He loves to snuggle. After a nasty bout of the flu in early 2015 in which he was repeatedly, violently ill, he and I bonded over his caretaking. He wanted me to do his bedtime reading, tuck him in, and I was the one he wanted to snuggle with on the couch. He would freely call out, “I love you!” as I closed his bedroom door.

She and I never had “moments” like Yo and I had early. She actually warmed to me much more quickly than he did. And though I’ve often heard her tell her mom, her dad, and Gammy and Bopa “I love you”, she didn’t say it to me. And that’s okay. In my family, we refuse to encourage or pressure kids into hugging us and I certainly would never press a niece or nephew to say “I love you”–and that definitely applied to my new stepkids.

It took me probably 9 months to point out to Tim that Ana hadn’t yet said, “I love you” to me. He hadn’t noticed, but once I pointed it out, he confirmed that it wasn’t all in my head. He also reassured me that even though she may not have said the words, that she loved me. And I believed that. It became an interesting study–not a contest, mind you. We both completely respected her boundaries and never called her out on it or encouraged her to say it to me.

She has grown over the last year in both her like and trust of me. And I knew that she loved me, even if she didn’t say the words. Her actions showed me.

Two weeks ago, she came to me before I was leaving the house, hugged me, and said, “I love you!” Tim and I almost fell over. She said it. And she meant it! It wasn’t an “automatic” type thing she said routinely as part of a good-bye. Tim actually noticed it seconds before I did. His head snapped up and he looked at me.

And you know what? Her words meant so much. It took a year to hear them…and they were worth the wait. 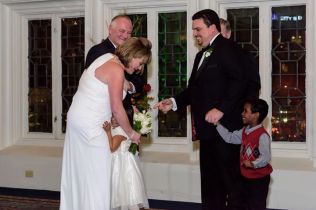