The first time I met Ana and Yoseph’s mom (over margaritas, a setting I highly recommend for any ex-wife/new serious girlfriend meeting), she shared that Ana is definitely a daddy’s girl. That is undoubtedly true. And it has made it that much more satisfying over the last year and a half that Ana and I not only love each other, but get along so well.

But I believe that is the result of some strategic decisions in our life. First, I am warmly secure in my knowledge that Tim loves me and puts me first. Because of that (and because of the emotional maturity you would expect a grown woman to have, duh), it is easy to not be jealous of an 8 year old girl’s need for quality time with her dad.

Second, we prioritize one on one quality time for Ana and Tim, as we do for Yoseph and Tim, but maybe more intentionally. Not in an over the top way, mind you–I am uncomfortable with this whole concept of daughters dating their dads (oh and this is a good post, too). When it’s time to snuggle on the couch or be tucked into bed, she consistently asks for her dad. And you know what? I think that’s great. I not only embrace it, but I encourage it.

Ana and I have our own special relationship. In the all important world of “what’s your favorite color”, a discussion we have with shocking frequency at our house (is this true for all children?!), Ana and I now share a favorite color: blue. It’s a special affirmation of her affection for me. (But do me a favor and don’t ask her what her favorite color is if I’m not around–it is probably purple.)

We are a family that loves Disney World. Last year on spring break, we were blessed to spend a day at the Magic Kingdom. It was our first trip as a family and we made fantastic memories. If you’re familiar with Disney’s Magic Bands system, you’ll understand the importance of a favorite color. (Short version: the band helps you get Fast Passes to rides, connect to photos taken of you, etc.) On our trip, we only purchased one band since we were there for one day and not staying the night on site. Since Tim wore the band, he got to choose the color: red (also known in our house, and the house of all Wabash College Little Giants, as Wabash Red). This has now sparked an ongoing negotiation in our house about who will wear what color of band on our next Disney trip.

Ana, competitive to the core, called dibs on the blue band.

She shocked me into momentary speechlessness with her declaration. And then I just burst out laughing. I advised her that if she pays for the band, she can choose the color. Otherwise she is stuck with pink or purple or yellow (Tim obviously gets red and Yoseph has decided he gets tie-dye, which does not exist, but whatever). It has become a weekly bantering between the two of us, negotiating who gets the blue band. It’s fun, healthy competition and teasing.

It has also opened the door to more competition and teasing. One day Tim said something at the dinner table like, “Look at these two beautiful girls in our family, Yoseph.” Ana and I both basked in the compliment and smiled at each other. Later that night, this note from Ana was taped to our bedroom door:

Translation: “You guys are the best. I want you do a favor for me.” 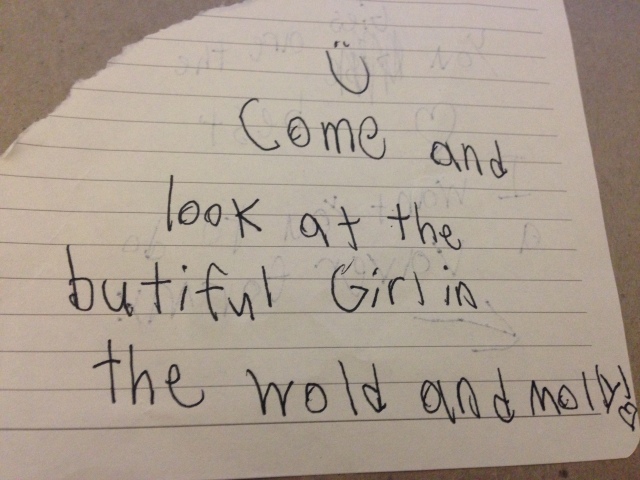 Translation: “Come and look at the [most] beautiful girl in the world…and Molly!”

Tim was laughing so hard he couldn’t speak. This note is easily one of my most favorite things she has created.

1 Response to A Friendly Competition