Probably five years ago, I started saying things like this:

“I don’t think I want to have biological kids. If I ever get married, I think being a step-parent is a great idea.”

“Step-parenting has to be like Parenting Lite. You’re only on the hook for 50% of the time! Piece of cake.”

Oh, early 30s Molly. You are a fool. (But there are lots of stories to prove that statement.)

It is nothing like this. I mean, yes, you only have to pack school lunches for half of the week. And…yeah, that’s basically it.

But it also isn’t easier.

It’s just different. It brings with it extra work that one wouldn’t expect.

Let me give you two examples: eye doctor appointments and haircuts.

Example Number One: Last summer, Tim took Ana to get her annual eye appointment before the start of school. From the doctor’s little eyeglass shop, he texted Ana’s mom a photo of Ana modeling the new glasses she wanted to get with her new prescription.

Except we had forgotten to tell her that Ana had an appointment and that the appointment would likely result in new glasses. And that in addition to the co-pay for the appointment, those new glasses would have a pricetag of over $150 that we would need to split. Oops. Totally, totally our fault.

We knew the appointment was coming and we had planned about $100 to cover the appointment and glasses out of that paycheck. But we hadn’t given her mom that information. So, the innocent text with a photo turned into a much bigger issue because now we were about to commit a chunk of her money–with zero notice. Oops. Totally, totally our fault.

In non-divorced/non-shared custody situations, you take the child to the eye doctor, pick out glasses that are cute yet affordable, swipe the debit card, end of story. But our circumstances aren’t that simple. So it requires extra diligence.

(But seriously, doesn’t she look cute in these hipster frames?!) 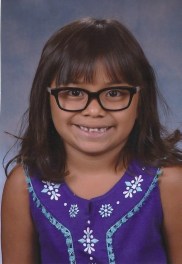 In mid-December, we realized Yoseph’s hair had gotten much too long. Tim and I discussed when was a good time to take him for a haircut, who would take him, where we would go, etc. But before we did, Tim reached out to Yo’s mom to ask if it was okay that we took him. She was about three weeks away from her wedding and we wanted to make sure that a haircut fit into what she wanted her photos from that day to look like.

This past week, she let us know that she was planning to take both kids for a haircut this weekend and wondered if we minded.

You may be thinking, “Why do these people think haircuts are such a big deal? Get over it!”

Sure, we could go get their hair cut with no notice or asking what she thought. And she could certainly do the same.

But it’s about mutual respect.

When they divorced, they really tried to lay some groundwork for a positive, healthy co-parenting relationship. And though I have grown to really loathe the term co-parenting, that’s exactly what we have. I dated lots of divorced dads, with all different types of custody situations. When Tim and I started dating, one of the things that most impressed me was that he didn’t bad mouth his ex-wife. He explained in pretty matter of fact terms what led to their split, that they still communicated frequently because of the kids, and that they were on generally good terms.

They sit together or near each other at school and sporting events, ensuring the kids don’t have to choose which parent to go to first at the end of the event.

They attend parent-teacher conferences together when schedules permit.

They walk the kids to the door when exchanging them (except now they’re older and sometimes run to the door on their own).

They collaborate on choosing extra-curricular activities that have a cost before agreeing to them.

Because we want to have a good relationship, we check in before getting haircuts. And we now overcommunicate about upcoming doctor appointments. And we make it a point not only to return clothes and toys from her house that end up at ours but to do so quickly. Sure, we sometimes do things she disagrees with or would do differently, and vice-versa. But our intention and our spirit is to keep things positive and collaborate when possible.

So step-parenting isn’t easier, not by a long shot. And it sure as heck is not a 50% of the time responsibility. If we only thought about kid-related things half of the time, nothing would get done. But next time you pick out your child’s winter coat without wondering what someone else will think of the color, breathe a little prayer of thankfulness for the simplicity of the task.

I am a daughter, sister, wife to Tim, StepMolly to Ana and Yoseph, and mommy to Harry. My favorite holidays are Black Friday, Christmas, and the day they announce Academy Award nominations.
View all posts by mollydeuberry →
This entry was posted in Uncategorized. Bookmark the permalink.