I learned early in this stepparenting adventure that disciplining the kids sometimes punishes the parents more than the kids…especially if it’s no TV during the winter. Today was another one of those days.

We promised the kids they could see the new Jungle Book movie after school today if they each had good behavior on their days with us this week at school. To be honest, it was mostly an incentive for Yoseph because Ana hasn’t had a single poor behavior grade this year. It seemed to work. Wednesday: green. Thursday: green. Friday, as of 1pm: green. Friday at 3pm: yellow, for talking out of turn and not listening. Sigh.

So, just as I was settling in to finish a work project at the kitchen table, Tim called to say he was headed home with the kids. As Yoseph stomped through the front door, I saw my bubble of productivity pop before my very eyes. Yo would have loved nothing more than to be banished to his room where he could sleep for an hour or two. Though that would have been easier for me, it hardly would have felt like much of a consequence for him.

So as Tim and Ana headed to the movie, Yo and I both mentally adjusted to the change in our plans for the afternoon. 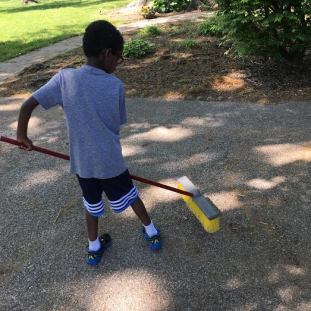 At least the weather is beautiful!