A T-Rex by any other name…

I don’t often take the kids clothes shopping. They wear uniforms to school, so their needs are actually pretty minimal. But recently, we were hunting elastic-waisted shorts for a skinny Ethiopian boy and so we found ourselves in the boys’ section of the downtown Carson’s.

“Look at this!” I called to Yoseph. “It’s a Tyrannosaurus rex. Pretty cool.” 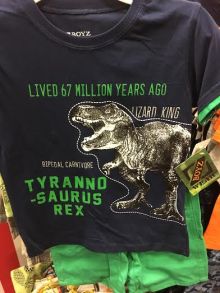 “No,” he responded authoritatively, and with a bit of judgment. “It’s a T-Rex.”

Ana watched the exchange like a ping-pong match and smiled at me knowingly. Some battles just aren’t worth fighting.