But if you WANT Legos…

While practicing sight words this week, Yoseph struggled with the difference between “went” and “want”. His Gammy, Tim’s mom Dolly, suggested the following sentence as he was trying to sound out “want”. 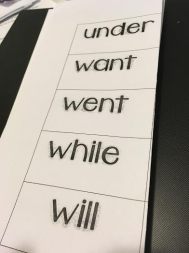 He continued in his bewilderment and frustration for a little bit until he finally burst out with, “…because I GOT some Legos!”

I am a daughter, sister, wife to Tim, StepMolly to Ana and Yoseph, and mommy to Harry. My favorite holidays are Black Friday, Christmas, and the day they announce Academy Award nominations.
View all posts by mollydeuberry →
This entry was posted in Uncategorized. Bookmark the permalink.